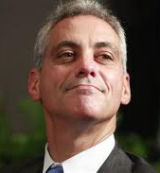 Chicago like many other big U.S. cities is increasingly marginalizing and pushing out working class and people of color.

Sweetheart deals put millions of taxpayer dollars in the pockets of wealthy developers building luxury projects for other well-off and downright wealthy people. Meanwhile, city services for middle and lower income people – from public schools to health clinics – get cut, and city workers themselves see their incomes under attack from an administration that says it has no money…until it comes to giving money to firms of campaign contributors.

In this episode of the Gay Liberation Network on Chicago Access Network TV, Brent Holman-Gomez and Andy Thayer discuss the Rahm Emanuel administration’s attacks on working people, from Tax Increment Financing Districts to cuts to city workers’ pensions, and how they fit into the growing impoverishment of most working people.